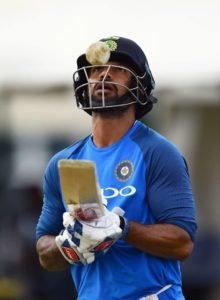 Shikhar Dhawan will come in for Murali Vijay, who is suffering from a wrist injury, in the India squad for the upcoming series against Sri Lanka starting on July 26.

Shikhar Dhawan has been selecte in Team India’s squad for the forthcoming series against Sri Lanka starting July 26 in place of Murali Vijay. The Tamil Nadu right hander has not played any competitive cricket since suffering a wrist injury after the Australia series, which Virat Kohli’s men won 2-1.

“Vijay, who had suffered a wrist injury during Australia’s tour of India, has complained of pain in his right wrist, while playing a preparatory match,” the Indian cricket board (BCCI) said in a statement on Monday.

“The BCCI medical team has therefore advised that Vijay should continue his rehabilitation program.”

Team India will play three Tests, five ODIs and one T20I on their tour to Sri Lanka. Dhawan last played a Test during India’s home series against New Zealand in Kolkata in October 2016. In that match, he managed scores of just 1 and 17. Following the end of that match, Dhawan sustained a hand injury and did not feature in England and Australia series.
The left-hander returned for the ODI series against England but he put on a fabulous show in the ICC Champions Trophy 2017. Dhawan started the tournament with scores of 68,125,78 as India entered the final but lost to eventual champions Pakistan by 180 runs. His excellent show helped him win the Golden Bat award for the second consecutive edition.
On the other hand, Murali Vijay has not played any competitive cricket since the end of the Australia Tests. After a magnificent series against England and Bangladesh, Vijay managed just 113 runs in three Tests at an average of 22.60. However, India managed to win the four-Test series 2-1 to end the home season unbeaten.

Following the conclusion of the series, M.Vijay said that he was playing with a fractured wrist that required surgery. “I couldn’t play certain shots and when I went out to bat, I had to grind it out. It was difficult to even defend off the front foot because it was my bottom hand that was injured,” Vijay said. The injury forced him to miss the IPL 2017 and the Champions Trophy.