Kumble suggested head coach should get 60% of Captain’s Earnings

Chief Coach Should Get 60% Of Captain’s Earnings: Anil Kumble’s Proposal To BCCI 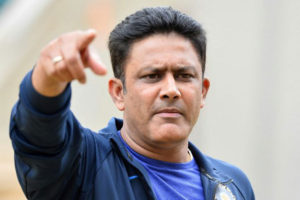 Anil Kumble had suggested significant hikes in the remunerations of the coaching staff of the Indian cricket team. In a proposal regarding the restructuring of the contracts that he had sent to the Indian cricket board, Kumble had demanded that the “chief coach should earn 60 percent of the captains’ estimated earnings”. The document also supported national coaches “earning from IPL” to “augment their income” without specifying whether it amounts to ‘Conflict of Interest’.

Kumble had also suggested that 20 percent of the players’ Central Contracts should be variable pay based on their “fitness standards”.

PTI has access to Kumble’s presentation, which he submitted on Committee Of Administrators’ (COA) behest during the final of the IPL on May 21.

Titled ‘Restructuring of Remuneration And Contracts of Personnel Of The Indian Cricket Team’, Kumble, on Page 12 of the document, proposed a hike for the support staff.

Under Point No 10 ‘The Suggested Change: Enablers’, the former skipper had given a four-column tabulation chart.

‘Enablers’ is a terminology Kumble used for the team’s support staff.

While suggesting a hike of Rs 7.5 crore from the ‘current’ Rs 6.5 crore, Kumble in the ‘Remarks’ column wrote: “At 60 percent of Captains’ estimated earnings’. Eligible for 30 percent of his salary as variable bonus on team performance”.

Kumble’s proposal is an indicator that whenever Virat Kohli would have earned more from the BCCI, his own earnings would have gone up proportionately.

However, something that has caught the attention of BCCI mandarins is his suggestion of national coaches “earning from IPL”.

Interestingly, former COA member Ramachandra Guha, in his parting shot, had written about national coaches “moonlighting” for IPL teams which he termed as a clear case of Conflict of Interest.

Many had perceived it as Guha’s veiled dig at Rahul Dravid, who doubled up as India A and U-19 as well Delhi Daredevils franchise.

However, Kumble in Page 11, Point No 9 stated: “Guidelines for Enablers” stated: “The Players are kept out of the contracts during two months IPL window. Similarly, the Coaches too need to be kept put of contract allowing them to be a part of the IPL — this will enable them to augment their earnings and gain more experience particularly for the T20 games.”

A BCCI official, who has studied Kumble’s proposal document, told PTI: “While a lot of issues are pertinent but even his proposal on IPL is contrary to what Guha had written in his letter.

“If we go by what Guha had written, what Anil had demanded is a clear case of ‘Conflict of Interest’.”

While he had suggested separate ‘Red and White Ball’ retainership contracts, there was one interesting point about a portion of Players’ ‘retainership fees’ or central contract money being linked as a “variable pay” subject to maintaining “fitness and Other Team Standards”.

As per Page 6 under Point No.5 ‘Suggested Changes: Players’, Kumble had given another four-column tabulation chart.

Under the remarks Column for the ‘Annual Retainership Fees’ for Tests, ODIs and T20s, Kumble wrote: “20 percent of the Retainer money can be given subject to a player managing his fitness levels and other team fitness standards during the year.”

Among other demands where “defined amounts” instead of “ad-hoc payments” for various wins like Rs 2 crore per player for 50-over World Cup while Champions Trophy and World T20 should carry a prize money of Rs 1 crore per player, each.

He had demanded “Superannuation fund from a part of Retainer Fee-access to post retirement” — a ‘Benefit Package’ with compound interest.

This is like companies deducting a portion of an employee’s salary for Provident Fund and Gratuity.