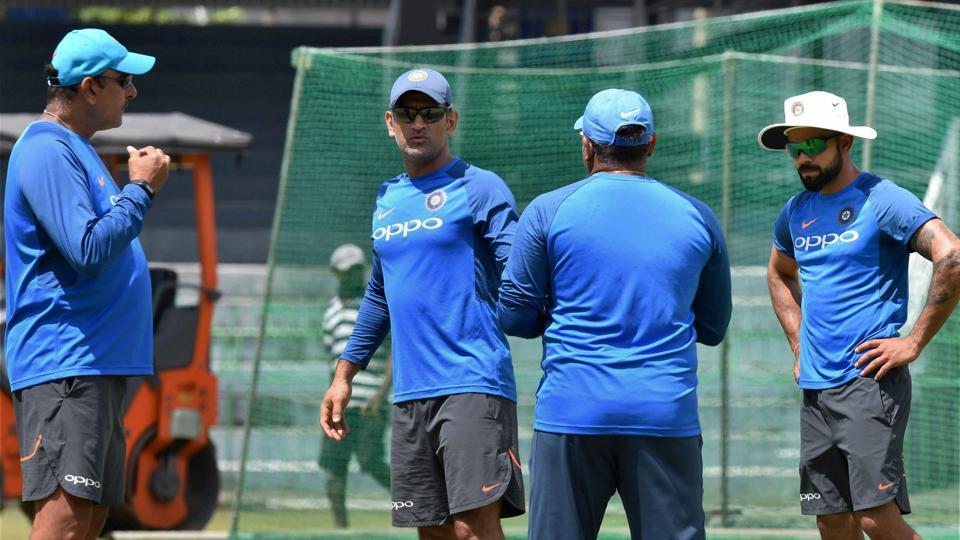 The Capatain Virat Kohli and Mahendra Singh Dhoni with head coach Ravi Shastri and bowling coach Bharat Arun during a practice session in Colombo ahead of the 4th ODI against Sri Lanka.

India cricket team will be anticipating to bring in the changes and experiment in the long build-up to the 2019 World Cup when they face Sri Lanka in the fourth One-Day International (ODI) at the Premadasa Stadium on Thursday.

Virat Kohli’s side has taken an unassailable 3-0 lead in the five-match series and face rivals who are down and out, but will be determined to present a victory to Mahendra Singh Dhoni, who will be playing in his 300th ODI.

The former skipper, who stepped up to play unbeaten knocks in the last two games after a batting collapse, will become the sixth Indian to complete 300 ODIs.

India faced testing moments while chasing targets in the last two games in Pallekele. So, it remains to be seen to what extent the team management will go for changes.

But Ajinkya Rahane and Manish Pandey, who last played an ODI in October and was sidelined for the ICC Champions Trophy in June due to injury, are waiting in the wings.

Among bowlers, chinaman bowler Kuldeep Yadav could get a chance.

Virat Kohli and Ravi Shastri, however, could be reluctant to make too many changes as India next take on Australia in an ODI and T20 series, starting on September 17, once they get back home.

The turbulence in Sri Lankan cricket has only intensified with the selection committee, headed by former skipper Sanath Jayasuriya, deciding to resign at the end of the current Indian series.

The selectors as well as Sri Lanka Cricket (SLC) have come under tremendous pressure on many fronts with fans and critics, led by 1996 World Cup-winning skipper Arjuna Ranatunga pointing the finger at the administration for the team’s plight.

Sri Lanka will have a third skipper in four matches. Lasith Malinga will lead on Thursday after stand-in skipper Chamara Kapugedera was ruled out due to a back problem.

Medical evaluation has ruled out @chamarakapu for the remainder of the series due to a lower back injury. Malinga will Captain the 4th ODI.

Malinga requires one wicket to become the fourth Sri Lanka bowler to complete 300 wickets in ODIs.

Kapugedera has reportedly caused a controversy in the Sri Lankan dressing room after choosing to bat on winning the toss in the third ODI. The team management had apparently decided Sri Lanka will bowl, to allow its three-pronged pace attack to exploit early seaming conditions.

In the end, Sri Lanka managed only 217 and India, despite being reduced to 61/4 in the 16th over, eased to a six-wicket victory with crowd hurling bottles as the hosts were on the verge of defeat.

Kapugedera is the latest in a string of injuries that have plagued the Sri Lankan cricket team. Dinesh Chandimal is out with a fractured thumb while opener Dhanushka Gunathilaka is in a race to achieve fitness after missing the Pallekele game on Sunday when he hurt his shoulder on the field.

The teams are pretty even at one of Sri Lanka’s premier cricket venues. Out of 31 matches played at the Premadasa Stadium, Sri Lanka hold a 15-13 edge with three games ending in no result.

We are looking forward to the Game, hope you are too.