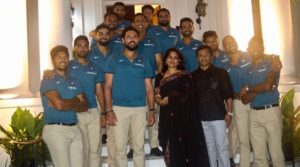 The Indian cricket team that is touring West Indies for a five-match series and a T20I made a visit to Indian High Commission in Jamaica. Presently, India are leading the five-match series 2-1 with one game to go. Virat Kohli’s men were all out for 178 in their last game while chasing 190 during the course. The hosts were boosted on skipper Jason Holder’s five-wicket haul to win the match.

India all-rounder Hardik Pandya too took to social media and uploaded a picture with Dinesh Karthik and R Sridhar on his Instagram account that said, “About last night 🙂 Good dinner good laugh 👌🏻 And a good picture with the portrait 😇 @coach_rsridhar @dk00019”

#TeamIndia at the Indian High Commission in Jamaica #WIvInd pic.twitter.com/MApGenCKNs

India entered the series after shockingly losing the Champions Trophy 2017 final against Pakistan at the Oval.
Whilst the West Indies ended their three-match ODI series against Afghanistan at 1-1.

Earlier, the first match between India and West Indies was canceled due to rain downpour while the Men in Blue won the second comfortably by 105 runs after Ajinkya Rahane’s emphatic knock of 103 runs guided India to 310/5 in 50 overs.
In the third game too, India grabbed a convincing win by 93 runs.

Kohli’s side made just two changes in the squad prior to start of this series. Kuldeep Yadav and Rishabh Pant made the cut in the squad while sadly Rohit Sharma and Jasprit Bumrah were rested.