Sourav Ganguly gets into a fight in a train.

Sourav Ganguly reportedly involved in a brawl with passenger in train, forced to change berth 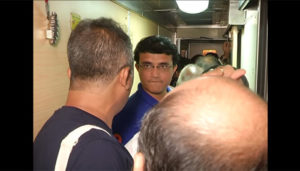 Former India captain Sourav Ganguly, who was recently in the newss over Ravi Shastri the selection of Team India’s new coach, unveiled his eight-feet tall bronze statue at Balurghat after traveling in train for the first time in 15 years.

Ganguly’s experience, nevertheless, wasn’t the most pleasing as he reportedly got into a brawl with fellow passenger and was forced to change berth.

“I travelled in train once after 2001. It’s been almost after 15 years,” Ganguly said as he alighted from the Padatik Express in Malda this morning.

He headed to Bikash Maidan in Balurghat where he was greeted by thousands of crowd. “At Dakshin Dinajpur, just human heads,” the former left hander tweeted.

The statue was of a young Ganguly raising his bat to acknowledge his first Test century against Australia in the Brisbane Test, 2003.

better journey next time what do you say?
To Top