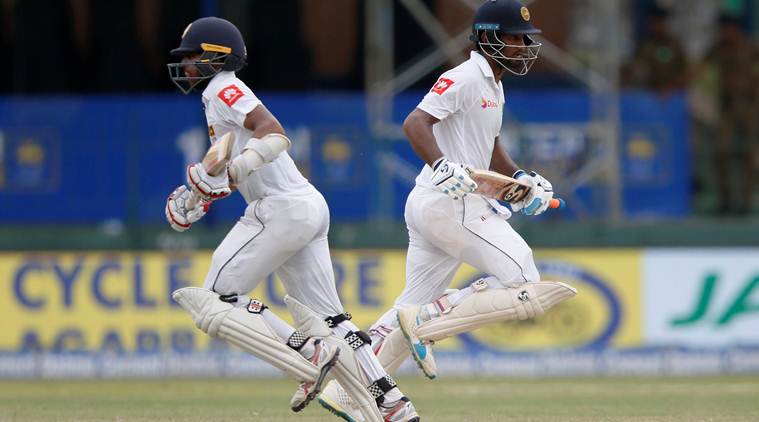 Their partnership was the second highest for the second wicket for Sri Lanka against India after 576 runs put on by Sanath Jayasuriya and Roshan Mahanama in 1997.Earlier, Sri Lanka came out with a lot of positive intent as they reached 118 for 1 at tea after being asked to follow-on.
Post lunch, Lanka began their second innings after being asked to follow-on. Kohli again opened with spin from one end, handing Umesh Yadav (1-29) and Ashwin the new ball.
Yadav bowled opener Upul Tharanga (2) in the third over as India made a quick start in their bid to win this Test.
But Karunaratne and Mendis stood firm to defy the Indian bowling. Key to their stand was seeing out Ashwin’s initial spell as Mohammed Shami was soon introduced into the attack along with Jadeja.
The two batsmen left the ball well and played some brilliant strokes to keep the runs ticking along as Lanka’s 50 came up in the 12th over.India missed one chance when Shikhar Dhawan dropped a sitter at mid-on off Ashwin in the eighth over when the centurion was batting one one.
Thereafter, there were no slip-ups as he duo brought up their 50-partnership in 79 balls. Later their 100-partnership came up in 113 balls as Lanka crossed 100 in the 24th over.
Mendis also survived a caught behind appeal off Jadeja via DRS as the ball touched the thigh pad and was never even close to the edge. Karunaratne scored his 13th Test half-century off 83 balls, while Mendis scored his 5th Test half-century off 53 balls as they countered the Indian bowling for once.Earlier, in reply to India’s mammoth 622/9 declared, Sri Lanka collapsed to 183 all out at lunch conceding their highest-ever first innings’ lead in Test cricket – 439 runs, more than 419 runs against Pakistan at Galle in 2000.
Ashwin (5/69) picked up his 26th five-wicket haul in Test cricket.
Starting from overnight 50/2, it was surprising to see Ashwin not handed the ball straight away. Instead, Umesh Yadav (1-12) and Jadeja (2-84) started proceedings, getting instant results.
Dinesh Chandimal (10) was the first to go, in the fifth over of the day, caught at square leg off Jadeja. In the very next over, Yadav had Mendis (24) caught at mid-on, striking a double body blow to Sri Lanka’s hopes of defiance on this day.
It brought Angelo Mathews (26) and Niroshan Dickwella (51) to the crease, and the duo decided to attack the Indian bowling, particularly the spinners. Together, they hit 7 fours and 3 sixes against Jadeja and Ashwin who had been introduced into the attack. They put on 53 runs for the 5th wicket taking Lanka past 100 in the 33rd over. However there weren’t any more partnerships of note as they were all-out for 183 in little under 50 overs.