India Cricket Team Has The Most Social Media Fans

Cricket is a sport with a huge following in all major sporting nations around the globe. Nowadays social media sees a great involvement in cricket and has gradually become a hotbed of discussion, debate, analysis, trolls and much more. Cricketers and teams enjoy a lot of support from their fans on all the major platforms. Here we have a look at the cricket teams with the most number of fans and followers collectively on the three social networks – Facebook, Twitter, and Instagram. 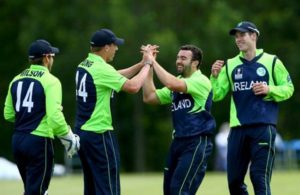 World T20 2016
Ireland squad for the World T20 2016. (Photo Source: Twitter)
Ireland cricket team is yet to make bigger strides in international cricket but still have more fans than Zimbabwe, Oman, Kenya, etc. The greatest achievement for Ireland in international cricket is the 3-wicket win over England in the 2011 World Cup, where their middle order batsman, Kevin O’Brien recorded the fastest century in World Cups and helps his side chase down 327. They have also beaten Pakistan in the 2007 Cricket World Cup.

New Zealand cricket team nicknamed as Blackcaps is ranked 7th in Tests, 2nd in ODIs and 1st in T20Is in the ICC team rankings. They haven’t won any titles but had progressed to the finals of the World Cup last year in 2015, after beating South Africa in the semi-finals. However, they lost to Australia in the finals. The team has in the last few years been a fan-favorite team for their fearless brand of cricket.

West Indies was one of the strongest sides in international cricket in the 1970s, with the likes of Sir Viv Richards, Sir Curtly Ambrose, Michael Holding, Courtney Walsh, Brian Lara, Clive Lloyd, Malcolm Marshall and with many more legends in the side.

From the late 1990s, The Lankans rose from being underdogs to winning the World Cup in 1996 and since then, they have been a strong team. Sri Lanka has won the Cricket World Cup in 1996, the ICC Champions Trophy in 2002 (co-champions with India), and have won the ICC World Twenty20 championship in 2014.

Currently ranked 6th in Tests, sixth in ODIs, and 8th in T20 internationals, they also hold the record for the highest team totals in all formats of the game and is also the only team to feature in every edition of Asia Cup. Sri Lanka has 2.6m fans on Facebook, 400k followers on Twitter and 51K followers on Instagram.

England currently ranked fourth in Tests, sixth in ODIs and fifth in T20Is, have won only one ICC trophy, which is the World Twenty20 in 2012. They have almost 3.2 million fans on Facebook, 303k followers on Twitter and 269k followers on Instagram.

The Proteas have a huge fan base despite being unable to lift any titles. They have never progressed beyond the semi-final stage at a World Cup and hence have the unwanted tag of the ‘chokers’. South Africa is currently ranked fifth in Tests, fourth in ODIs and fourth in T20Is. They have the third highest number of Twitter followers (701k) behind India and Bangladesh.

On 28 August 2012, South Africa became the first team to top the rankings in all three formats of the game. They probably have the best opening batsman in Hashim Amla, best finisher in AB de Villiers and the best fast bowler in Dale Steyn. South Africa has 3.9m fans on Facebook, 724k followers on Twitter and 165k followers on Instagram.

The Green army, Pakistan is behind India and Bangladesh on the third spot with a total of 6.8 million fans. They are ranked first in Tests, ninth in ODIs and seventh in T20Is in the ICC rankings.

Pakistan cricket team had won the ODI World Cup back in 1992 and had clichéd the title in the World T20 in 2009. They have the third-best win/loss ratio in Test cricket of 1.135, and the fifth-best overall win percentage of 31.89%. They have 6.3 million fans on Facebook, 424k followers on Twitter and over 127k followers on Instagram.

Bangladesh played their first ODI match on 31 March 1986 against Pakistan in the Asia Cup. The Bangla tigers are currently ranked ninth in Tests, seventh in ODIs and tenth in T20Is.

The team has a huge fan base on Facebook with over 9.6 million fans. Bangladesh is currently having a great time in international cricket for the last two years or so, winning home series against India, South Africa, and Pakistan and they later trashed England out of the World Cup 2015 to qualify for the quarter-finals. They ended as the runners-up of Asia Cup in 2012 and 2016. Bangladesh has 913k followers on Twitter and 200k followers on Instagram.

Unsurprisingly, India heads the list with 30.8m fans across all social networks. India is known to be a cricket crazy nation and the numbers only back the statement. The Indian cricket team has over 26.3 million fans on Facebook, over 2.8 million followers on Twitter and 1.7 million followers on Instagram.

(All stats in this post are updated till 7th September 2016)