There was some excitement at the Sabina Park on Friday and Saturday as the big names of West Indies cricket finally returned to play in maroons. Chris Gayle, Marlon Samuels, Kieron Pollard and Sunil Narine, all of who were left out of the ODIs despite being fit and available, took the field and after a brief chat with coach Stuart Law got down to business.

“These are players who are massively experienced in Twenty20 cricket. You don’t need to tell them anything. They’ve played more Twenty20s than I have,” coach Law said when asked how tough it is to handle frequently changing sides.

The hosts, having been thrashed by India 3-1 in the ODIs will look to restore pride when they take on India in the one-off Twenty20 International here on Sunday.

West Indies are the world champions in this format and they have had the better of India, winning four and losing two in seven Twenty20 Internationals.

💯today to make18th ODI hundred while chasing against the West Indies in the series decider. Will he become the best batsmen ever?

Join our group where people team India fans are discussing this  in USA https://www.facebook.com/groups/687192931464624/?fref=mentions

Join our group where where people team India fans are discussing this  in UK  https://www.facebook.com/groups/2295079424049851/?fref=mentions

Chris Gayle is 37 now, will be playing for West Indies after over a year. He is looking to play at the 50-over World Cup in 2019 as well as the next Twenty20 World Cup.

Team India will look to complete their tour of the West Indies with a win.

Captain Virat Kohli might open in the one-off Twenty20, aiming to finish their Caribbean sojourn on a high. 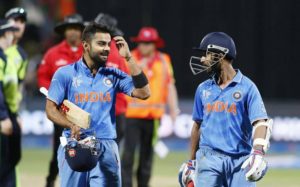 Ajinkya Rahane has had a fantastic ODI series with close to 350 runs including a century and three half-tons, Kohli opening the innings with Shikhar Dhawan looks more likely considering the change in format. 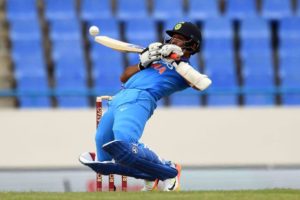 Rishabh Pant could finally get his chance on the tour. Pant was a part of the playing XI that last played a T20 match against England in Bengaluru, earlier this year.
Indian team management is aiming to groom Pant as the future limited-overs glovesman and that’s the reason he may get his chance.

Kuldeep Yadav, who has been a successful T20 bowler for Kolkata Knight Riders, may also make his T20 International debut after an impressive series in which he picked up eight wickets.
Since there has been a pattern in the first XI selection of the Indian team, the last T20 International saw leg-spinner Yuzvendra Chahal pick up six England wickets.
However Chahal not being a part of this squad, the management may go for a wrist spinner in Kuldeep, who has the natural ability to trouble the batsmen with his wrong ‘uns.
IPL’s highest wicket-taker, Bhuvneshwar Kumar, after some well-earned rest, will be leading the pace attack alongside Umesh Yadav.
For West Indies, the onus will be on their spin twins Narine and Badree, who can trouble the Indian batsmen with their variations. Narine may also open the innings, something which he successfully did for KKR in the IPL.

Be sure to check out scores and results to keep up to date with the game and JOIN our FACEBOOK GROUPS in your region so we can cheer on Team India Together. in India ,     in UK,       in USA

In UK  watch on

begins at 9:00 PM IST (Sunday evening). The toss will take place 30 minutes before the start of live action.

Will Team India win the toss or will we see the return of the double sided coin  click link to find where you can get the same.

look forward to the match and see you in the facebook groups.