As War of words continue ahead of tommorow’s match, MS Dhoni gets photo clicked with Sarfraz Ahmed’s son

This is the second time, the two rivals are coming face to face in this tournament. They had played in a Group B match on June 4.

On the eve of the grand final, the players from both sides were seen in a jolly mood. One such example was the photograph of former Indian captain MS Dhoni with the baby son of Pakistan skipper Sarfraz Ahmed. Sarfraz’s son was born in February this year. The Pakistani captain had revealed that he is a great admirer of Dhoni and also idolises him. Here is the photograph of Dhoni and Sarfraz’s son tweeted by Indian journalist Rajdeep Sardesai. 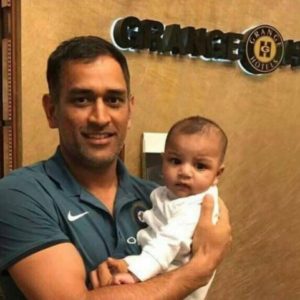 As soon as the photograph was posted on Twitter, it went viral and several fan reacted to it. Here are some fan reactions on the photo

Class act from Dhoni A fan hailed MS Dhoni as a class act.

Enemies on the field, not off the field MS Dhoni got clicked with Sarfraz Ahmed’s son.