Preview of India vs Sri Lanka 1st ODI in Dambulla. 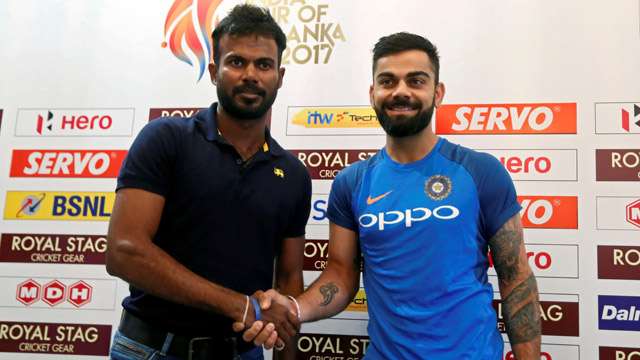 Virat Kohli’s men thumped the Islanders in the three Tests, posting easy wins through all-round performances. In the first Test at Galle, India registered a 304-run triumph, while in the second Test at Colombo, they won by an innings and 53 runs. The third Test saw the visitors claim a victory by an innings and 171 runs in a totally dominating display.

India are mighty high on confidence following these triumphs and they need to be in the right frame of mind as they switch to the 50-over white-ball format from the five-day affairs.

Sri Lanka, with their pride and quality at stake following the recent defeats, will be desperate for redemption. Test cricket is the hardest format that exposes the gulf in quality of the teams to the limit but the limited overs matches are expected to be balanced, even though the visitors should be overwhelming favourites.

Currently eighth in the ODI rankings, Sri Lanka will be eyeing the chance to seal direct qualification for the ICC Cricket World Cup 2019. And out of these five matches, the 1996 World champions will have to win at least two matches to secure a place in the pinnacle 50-over competition by staving off the challenge from the West Indies. The cut-off date for direct qualification is September 30.

Sri Lanka have 88 points, 10 points more than the West Indies, which has an unenviable task in its aim of being among the seven top-ranked sides apart from host England to gain direct qualification.

As for third ranked India, only a 4-1 series win will ensure it stays ahead of England. Even a 3-2 win for India will mean they will slip to 113 points and behind England on decimal points owing to Sri Lanka’s low ranking.

India have picked a young bowling side, having rested spin-twins Ravichandran Ashwin and Ravindra Jadeja and fast bowling pair of Umesh Yadav and Mohammed Shami.

On the batting front, Karnataka middle-order batsman Manish Pandey is expected to bat at No.5. And the right-hander will look to justify his selection in the squad ahead of veteran southpaw Yuvraj Singh, a key member of India’s 2007 World Twenty20 and 2011 World Cup-winning squads. Pandey’s statemate Lokesh Rahul might bat at No.4.

Another veteran, Mahendra Singh Dhoni will also look to make the most of the opportunities as far as banishing the calls for injecting fresh legs are concerned. The 36-year-old’s power-hitting is on the wane and it will be interesting to see his batting position.

Both Yuvraj Singh and Suresh Raina were spotted at the National Cricket Academy (NCA) in Bangalore prior to the squad announcement. Hence, it was assumedn that the duo would travel to Sri Lanka for the ODI series.

However, the official announcement of the squad left everyone surprised, as both the names were not present on the list of 15 players that are to play the limited-overs series.

Among bowlers, the fitness of pace spearhead Lasith Malinga will be the key. Sri Lanka have recalled all-rounders Thisara Perera and Milinda Siriwardana into the squad. Left-arm spinner Malinda Pushpakumara may make his debut, while pacemen Dushmantha Chameera and Vishwa Fernando will share the new ball.