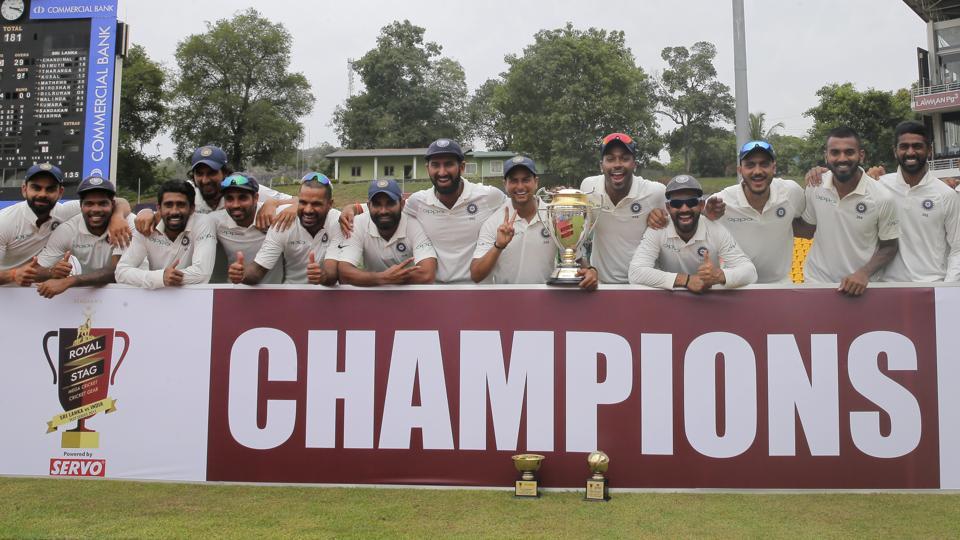 India vs Sri Lanka, 3rd Test, Day 3, Highlights: India beat Sri Lanka by an innings and 171 runs inside three days of the third and final Test to complete an historic series sweep in Pallekele on Monday.

India beat Sri Lanka by an innings and 171 runs inside three days in the third and final Test to complete a 3-0 whitewash. Dinesh Chandimal’s men were all out for 181 in their second innings after being made to follow on. Ravichandran Ashwin took four wickets while Mohammed Shami finished with the figures of 3/32. Earlier, the hosts were bundled out for 135 on Sunday after India posted 487 in their first innings.

Virat Kohli is the second Indian captain to lead the country to two clean sweep series wins after Mohammed Azharuddin, who did the same against England in 1992-93 and Sri Lanka in 1993-94.

Virat Kohli: “A good day, a good win. Always nice to have a convincing win. I would say the regulars have performed, the biggest positive was Hardik’s inclusions – he gives us a boost in the middle order. We are a young side, looking forward to all Tests, that’s the only way you can be ruthless. We like to be proactive instead of reactive.”

Dinesh Chandimal: “You can’t control the toss, a tough series as a team. India played some good cricket. Our batting and bowling was below-par through the series. We had to be more patient and concentrate more.”

Shikhar Dhawan (Man of the Series): “Before the series, I was in Hong Kong enjoying my holiday. Things went very well for me. I got backup from my management, enjoy playing this way, it’s my natural game. I’ve to keep doing it, nothing permanent, we have tight competition for all positions.”

Hardik Pandya (Man of the Match): “I was glad that I got my first hundred here, situation pretty good for me. I was always going to have a target in mind. Test cricket is not easy to get five-fors, takes plenty of hardwork. I’m alright with where the team needs me to bat.”

Ajinkya Rahane: “Played a wrong shot, played on instinct (first-innings dismissal). When a guy isn’t doing well, he (batting coach Sanjay Bangar) takes you out for dinner and gives you positive vibes.”

Kuldeep Yadav: “Nice feeling, there were expectations form family and friends, happy that the match went through nicely. I think Kookaburra ball is more helpful for my style of bowling, the ball tends to spin a lot more when compared to the SG ball. Looking forward to the ODI series.”

Ravichandran Ashwin got four wickets on Monday as India crushed Sri Lanka by an innings and 171 runs inside three days to complete their first three-Test series sweep on foreign soil.

Off-spinner Ashwin and paceman Mohammed Shami shared seven wickets as Sri Lanka were bowled out for 181 in their follow-on in Pallekele.

Sri Lanka crumbled to 135 all out in their first response to India’s first innings 487, putting the world’s top Test team in firm control.

“We are a young side. We look forward to playing Test cricket with the same kind of excitement,” claimed captain Virat Kohli.

“That’s the only way you can be ruthless … We like to be proactive rather than reactive.

“We have age on our side. We have an opportunity to play together for five-six years with this whole bunch and this really excites us.”

Allrounder Hardik Pandya set up the win with a blistering, 96-ball 108, cracking his maiden Test century in just his third game.

The 23-year-old Pandya, who hit eight fours and seven sixes, received the player of the match award. He also bowled former Sri Lanka captain Angelo Mathews for nought in the first innings.

“The regulars have performed like they have been doing … but the biggest positive would be Hardik’s inclusion and the way he has shaped up in the first three Tests,” said Kohli.

“The kind of confidence he has shown with the ball and the maturity with the bat as well, it really gives the boost down the order and a lot of balance as far as our composition of the side is concerned.”

Great to be a part of this team, massive team effort for winning this series. Some really special performances, onto the ODIs now. 👊✌️ pic.twitter.com/hvgQS7hzUi

And Ashwin kept up the pressure on the beleaguered hosts, striking the first blow of the morning session by sending back opener Dimuth Karunaratne for 16.

Lankan captain Dinesh Chandimal, who made 36, provided some resistance during his 65-run fifth-wicket stand with Angelo Mathews.

Kuldeep was playing just his second Test, broke the partnership with Chandimal’s wicket just after lunch, and Ashwin soon got Mathews for 35 as Sri Lanka slipped further.

Shami combined with Ashwin to mop up the tail as beleaguered Sri Lanka suffered their second successive innings loss after the Colombo Test.

“A tough series as a team. India played some good cricket. Our batting and bowling was below-par through the series. We had to be more patient and concentrate more,” said a disappointed Chandimal.

ICC champions trophy Golden Bat winner Shikhar Dhawan, who hit a brisk 119 in the first innings, was named the player of the series for topping the run chart. The left-handed batsman accumulated 358 runs in the series with two hundreds.

The two sides shall now play limited-overs matches with the first of the five one-day internationals on August 20 in Dambulla. They will play a single Twenty20 match after.

HOPE YOU ENJOYED THE SERIES AS MUCH AS WE DID?