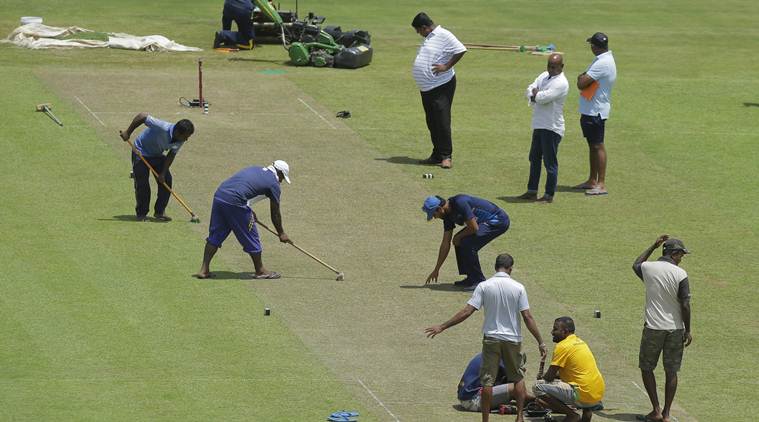 Team India, have already cemented the series, will like to complete a whitewash and if they do it, it will be India’s first ever in Sri Lanka in a Test series. Both teams clash in Pallekele for the final Test but rain threatens India’s chances.

At first glance the Pallekele international cricket stadium doesn’t seem to give a positive feeling for the team batting first. The ground is under covers with rains hitting Kandy. There is a little moisture in the wicket and the batsmen need to survive the first session. It’s different from the two wickets we saw in the first two Tests. They were true batting surfaces on the the first days. India piled up 600 runs batting first on both those wickets. Kandy will sure be a challenge.

There is also the chance of rain.

Team India have never whitewashed Sri Lanka in their own soil and this is the best chance they have. If they win the third Test, Virat Kohli will be the first captain to do it. He will also have five wins in a row in Sri Lanka.

However, he is forced to make a change in his winning XI from the previous match as Ravindra Jadeja is suspended by ICC. Kuldeep Yadav is likely to replace him but if the pitch is as green as it is on Friday, we may see a third seamer come in. Bhuvneshwar Kumar will be ideal given the conditions that assist swing. If the grass is trimmed before the start of play and that could mean the India go in with two spinners and two pacers.

Sri Lanka have another problem on there hands. Nuwan Pradeep, their best pacer in recent past, and Rangana Herath, their second highest wicket-taking spinner, have been ruled out and they have to back a pace attack with three bowlers who have not even played 10 matches each.

In batting, there seems to be rare exceptions of Niroshan Dickwella and Dimuth Karunaratne. Others have  not batted well. Angelo Mathews have only two half-centuries in four innings, Dinesh Chandimal didn’t impress on his return in Colombo and Kusal Mendis needs to continue after his century in the second Test.

Indian captain Virat Kohli wants his team to focus on the task at hand rather than get carried away by the prospect of completing a whitewash over Sri Lanka ahead of the final test at Pallekele on Saturday.

“For us, it’s all about playing another test match. We have already won the series,” Kohli told a news conference on Friday.

“It doesn’t mean we can afford to be complacent. You can’t look at these things and go to a game. We are not thinking about these things.

“I personally feel it is just a distraction, we need to stay in the present and treat every session and game with respect.”

Kohli indicated that India would not make wholesale changes to the side, but said Kuldeep Yadav could replace suspended allrounder Ravindra Jadeja.

The toss could all well make a difference. Kohli has won both times till now and will hope to be third time lucky as well and take the advantage on a wicket, with a backdrop of hills, will assist seam.

ARE YOU LOOKING FORWARD TO THE FINAL MATCH?