Save the date 4th June 2017 for the much-anticipated India vs Pakistan match taking place at Edgbaston in Birmingham. The 2017 ICC Champions Trophy is all set to commence on June 1 and continues till June 18. The eighth edition of Champions Trophy will be hosted by England with India as the defending champions. Played in the 50 overs One-Day International Format, the opening match is scheduled between England and Bangladesh at The Oval, London. The complete match fixtures of ICC Champions Trophy 2017 with match timings and venue along with final team squads has been announced. The most watched out match of the tournament according to the CT2017 time table is India vs Pakistan on June 4. Both sides are geared up to take on each other after last in 2016 ICC Twenty20 group stage match. The cricket buffs can download the full time table of ICC Champions Trophy 2017 in PDF or save in JPG format to be all set to follow the exciting 50-overs format.

ICC Champions Trophy 2017 is the eight edition of successful cricket tournament which was first held in the year 1998 hosted by Sri Lanka. The CT 2007 would see the participation of eight teams – England, Australia, New Zealand, Bangladesh, India, Pakistan, South Africa and Sri Lanka – divided in two groups. England, Australia, New Zealand and Bangladesh are placed in Group A while India, Pakistan, South Africa and Sri Lanka are placed in Group B.

ICC Champions Trophy 2017 sees an increase of $ 500,000 in prize money from the 2013 edition. The International Cricket Council (ICC) announced about giving a hike in the prize money, making it USD 4.5 million with a winner’s share of USD 2.2 million. The runner-up of the tournament will get a cheque of USD 1.1 million, while the other two semifinalists will earn USD 450,000 each. Teams finishing third in each group will take home USD 90,000 each, while the teams finishing last in each group will get USD 60,000 each. 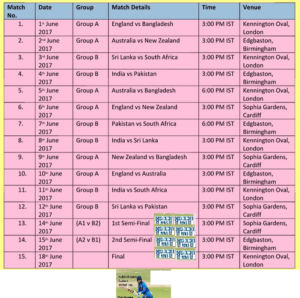